Dial: Black with applied steel indexes, aperture for the date. The crown at 4 is for winding and hand-setting. Tropical revolving inner bezel Luminous steel baton hands.

Signed on movement, case and dial.

In the late 1950s Enicar began supplying watches to mountain climbers and other sportsmen and adventurers as a marketing exercise.  Enicar Seapearl watches accompanied the Swiss expedition to the top of Lhotse and Everest in the Himalayas in May 1956.   The Swiss expedition reached the summit of the Himalayan Lhotse Mountains  and a week later the bordering summit of Mount Everest. This was only the second time the summit of Everest was reached. A few members of the expedition members were wearing Enicar Seapearl watches. It is this while promoting this expedition that Enicar launched new model called the Sherpa.

In 1958, Bulova was developing a s diver’s watch for the US Navy’s Experimental Diving Unit. While the Bulova was under development, the Navy was performing official testing on the Rolex Submariner 6538 and Blancpain Fifty Fathoms Milspec 1 divers.

The Enicars Sherpa Super-Dive is the largest of all Enicar Diving watch. The case is fitted with the famous SuperCompressor case  manufactured by Ervin Piquerez SA from the mid 1950s until the early 1970s, most famously used by Jaeger Le Coultre for its Polaris. The above watch has aged beautifully with a tropical tone on the inner bezel and luminous plot which have turned a bright yellow. This reference was also used by the Polish Navy during that period. A rare watch full of History at an affordable price. 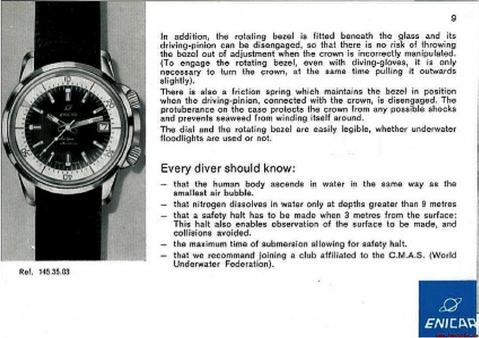