Mathey-Tissot was established in 1886, in the village of Les Ponts de Martel in the center of the Swiss Jura Mountain. Originally, Mathey-Tissot specialized in "repeater" watches which were sold to more established brands.  Soon afterward, the company undertook the production of Chronographs which were becoming popular in the late 19th century. Demands for such complications increased tremendously with different conflict in Europe and elsewhere. Mathey-Tissot supplied watches to the British troops during the Boer War in South Africa. Later during the First World War, the company supplied The United Sates Army Corps of Engineers and the General Pershing , commander of the US  Expeditionary Forces awarded Mathey-Tissot watches to his staff.

During the Second World War, Mathey-Tissot again supplied the US and British forces.  After the War, the company was a well know "private label" supplier for more famous brands who had large orders to deliver. In 1954, Breguet was awarded the contract to supply the French Airforce and Navy with the Chronograph Type 20 with flyback. The famous brand ordered some of these watches from Mathey-Tissot and they were delivered branded with Breguet signed dials. Mathey-Tissot would later commercialize a few of these watches under its own name.

Breguet also experimented supplying French military and civil divers with different type of diving watches made by Mathey-Tissot and others to compete with Blancpain. However, they never fully committed to market these watches and only a very few Breguet signed diving watches exist today.

This example is one of these few signed Mathey-Tissot diver watches which were sold to the public. It is in excellent condition with a beautiful patina, sharp case and bezel at still a very affordable price. 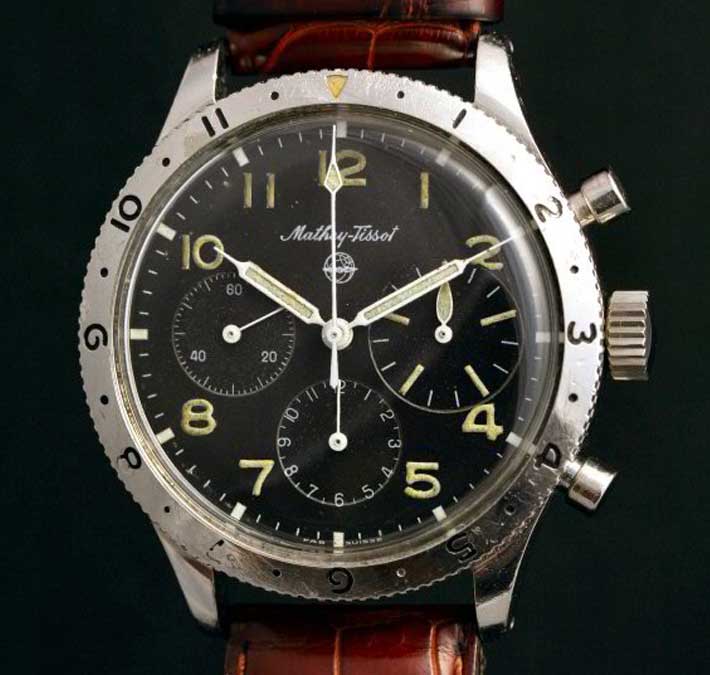